Network Sound and Video
Bring in your records for an free evaluation and estimate.  Call us for more information.

Did you know ... The term "record album"  originated  from the fact that 78 rpm records were grouped together in a book that resembled  an album.   Today, the term album is still used to describe any sound recording collection such as CDs, Cassettes, MiniDisc and digital or MP3 albums. 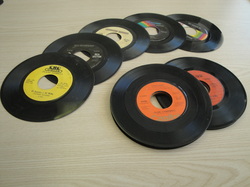 RCA Victor developed the 45 rpm format in 1949 in response to Columbia Records introduction of the 33⅓ rpm
format.  45 rpm vinyl  records were made especially for individual popular  songs.  Extended-play (EP)  45s also were developed and was a very successful  commodity on the commercial  market.
This new technology was not just for the older record collectors but also to capture a new generation of record buyers. But of all the records made, the 45-rpm record  had its largest success with the jukebox during the rock and roll era and into the 1960s. The new 7 inch 45 rpm format was more popular by the young rather than the LPs because 45 rpm record was cheaper to buy than a 33⅓ long  playing 12 inch albums. 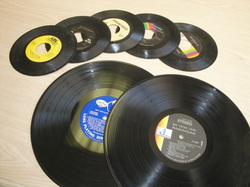 In 1948 Columbia Records produced the first 12" 33 1/3 rpm record made of vinyl, 2-sided.  The capacity of an album is typically 22-26 minutes per side.
Long play (LP) albums were the primary release  format for recorded music until the CD significantly took over by the year 1990.

Did you know...Vinyl records are prone to being scratched.  A scratch can cause popping  sounds.  Large scratches will cause the needle to jump out of the groove.  If it  jumps ahead to a groove inward, the information gets skipped.  If it jumps outward to the groove that just played, it can repeat and loop, serving as the figure of speech for things that repeat continuously... "like a broken record".